Barley Brothers holds the title of having "the most taps in Canada" – an impressive label for a local craft beer pub with two locations. They opened their first restaurant in fall 2013 at Polo Festival (655 Empress Street). Its success gave them the confidence to pursue their latest venture, Barley Brothers Stadium, which opened last summer at 2005 Pembina Highway. 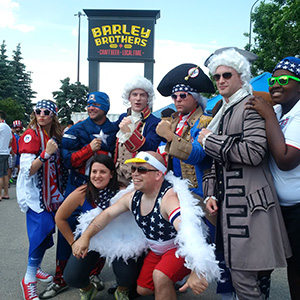 When FIFA Women's World Cup 2015 came to Winnipeg, Barley Brothers showed their support by being the official fan headquarters for Desiree Scott, a soccer player born and raised in Winnipeg who won an Olympic Bronze Medal in 2012 and gold with Canada at the 2010 CONCACAF championship. 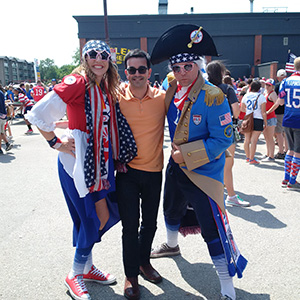 I was at Barley Brothers last Friday afternoon when they hosted the largest FIFA party in Winnipeg during the week of the tournament – including live bands, DJs, an outdoor BBQ & Beer Garden, and party games. When I arrived for a lunch meeting with Noel (President of FB Hospitality) at 1 p.m., the restaurant was jammed with a line-up out the door. The patio was packed and the tailgate party on the west parking lot was starting to fill up as well. Within an hour I met U.S. tourists from over 20 states, and started to feel like an ambassador welcoming everyone to Winnipeg. The excitement was palpable as they awaited the 7 o'clock US vs. Sweden Game at Investors Group Field. 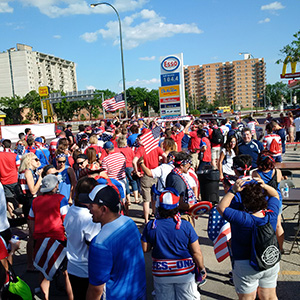 Barley Brothers is one of many restaurants owned and operated by Noel Bernier, president of FB Hospitality. FB Hospitality is committed to a non-profit called Go For the Gold, where five dollars from each pay cheque of staff, management, and owners (on a volunteer basis) goes "towards sponsoring three Manitoban Olympic athletes on a monthly basis for their living expenses and training" – Desiree Scott being one of these athletes.

"2015 FIFA Winnipeg will be remembered for all the colours of visiting countries starting their quest for Glory in Winnipeg, from the Green & Yellow jerseys of the Aussies to the Red, White, and Blue of our neighbours to the south, but the colours we will remember the longest and are most proud of is the Red & White of Team Canada, worn proudly by our own Desiree Scott pursuing international greatness for our country, province & city." –Noel Bernier – President FB Hospitality